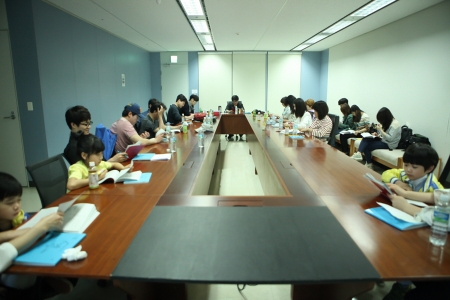 The production team for upcoming MBC TV weekend drama ‘Scandal’ has revealed a set of photos from their recent script recital session.
The script recital session which was held last month on May 16th, saw the attendance of director Kim Jin Man together with main cast members like Jo Jae Hyun, Park Sang Min, Kim Jae Won, Jo Yoon Hee, Kim Hye Ri and many others.
Director Kim expressed, “I really want to thank all the cast members for being here early in the morning to do this script recital session. I am directing once again after a 4 year hiatus, so I will going about doing it happily with a mind-set of a rookie.” This was then followed by self-introductions by the cast members before the session began.
‘Scandal’ is a story about a father who loses his son after their house collapses. The father then kidnaps the son of the person who caused the house collapse and brings him up as his own son instead. The son soon grows up and learn the truth, before embarking on his revenge plan while trying to mend his emotional scars at the same time.
The drama will succeed ‘Hundred Year Inheritance’ and begin airing from June 29th.
By: Noh Kyu Min
Copyright@KpopFighting.com